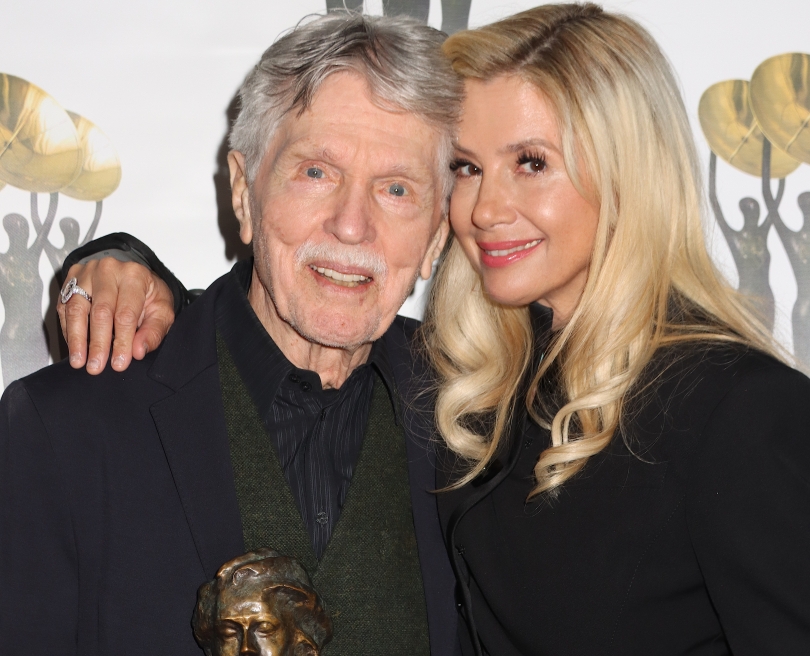 At the W Hotel Hollywood this past weekend, the 26th Satellite Awards capped off one of the most protracted Award Seasons in Hollywood history with a touching and emotional tribute from Oscar winner Mira Sorvino for honoree Tom Skerritt (TOP GUN, ALIEN), who recalled that he “started out in $1.98 movies,” joking about the low budget beginnings of a fantastic career on screen. His top honor, The Mary Pickford Award for Outstanding Artistic Contribution to the Entertainment Industry dovetailed with Humanitarian Award honoree Val Kilmer, also a TOP GUN alum. While Kilmer’s recent documentary VAL details the health concerns that kept him from attending the festivities, he provided amazing footage that clipped scenes from childhood to outtakes from his Iceman role to playing Doc Holliday, Jim Morrison, Mark Twain, up to the current role of throat cancer survivor.

Halle Berry, who won for Best First Feature with her film BRUISED, also accepted in absentia, along with Auteur Awardee Lin-Manuel Miranda, who recently skipped the 94th Oscars due to his wife’s COVID positive test. The complete list of remarkable winners and nominees can be found below, and clips of some great presenters like Oscar winning Film Editor Chris Innis, can be found on YouTube. The International Press Academy’s show included other poignant moments during this truncated 26th Satellite Award show that was meant to be sensitive of wartime conditions in the Ukraine with an intimate night. The Breakthrough Performance Award went to Artur Amanaliev, who made his own mark at the show.

Honorary Satellite winner Jenifer Lewis shared her triumph over bipolar disorder unbeknownst to the millions of fans who have watched her perfectly put-together sparkling personas on screen for years, from appearing in iconic shows like “The Fresh Prince of Bel-Air” to playing Tina Turner’s mother in “What’s Love Got to Do With It” to an coming appearance in Showtime series “I Love That For You.” Author of best-seller “The Mother of Black Hollywood,” Lewis sang a duet that brought chills in an evening that began with a solo classic guitar opening act. Her dear friend and colleague Brian Edwards, the legendary manager of greats like Donna Summer, was there to share their night as they posed in a stunning trio with IPA President Mirjana Van Blaricom. 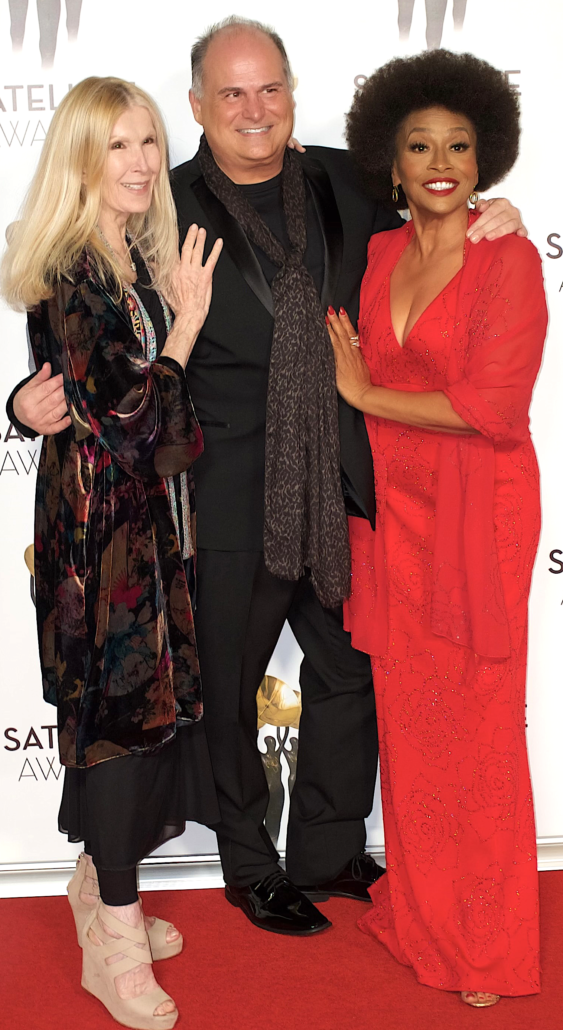 In a way, in this longest and strangest-ever Award Seasons, where one major televised show was even pulled off the air amid controversy – not to mention the infamous Oscar ’slap’ – this intimate insider night in Hollywood belonged to The Special Achievement winners, with Tom Skerritt and the International Press Academy’s most prestigious award.

Mira Sorvino, in a powder blue miniskirt and black cropped tuxedo jacket, shone bright as she shared his professional moments, as well as a personal anecdote to introduce Skerritt to the packed house.

“M*A*S*H, Alien, Top Gun, A River Runs Through It… these are just a handful of Tom Skerritt’s indelible performances. Who can forget him as “Dallas,” Captain of the Nostromo, in sci-fi classic Alien? Or as call sign VIPER, also so known as Commander Mike Metcalf in the worldwide smash hit TOP GUN? Yet, will all that unforgettable bravado, there’s a scene in Turning Point (1977) with Ann Bancroft, where Tom Skerritt plays Wayne, the beleaguered husband to Shirley MacLaine. His gift for  playing softer notes is remarkable in contrast to the hard-nosed roles. In a career that spans film and TV since 1962, Tom Skerritt has appeared in more than 40 films, made 200 television appearances and won an EMMY for his role in David Kelly’s series “Picket Fences.”

Then the Mighty Aphrodite star switched gears, as Sorvino revealed her experience working with the night’s honoree.

“I had the honor of working with Tom, as his daughter, in a wonderful film called ‘East of the Mountains.’ It has a perfect 100% on Rotten Tomatoes, which is the only film I’ve ever been in that has that, it’s incredible.”

East of the Mountains (2021) is an end-of-life journey in which Skerritt plays Ben Givens, a retired cardiac surgeon, who discovers that his own diagnosis, untreatable cancer, will require some soul-searching.

Sorvino said that Tom Skerritt, 88, took this role to heart, with “such quiet simplicity and depth of reality.”

“He is great actor, and to be putting out a great performance as the lead of a film, in a decade when many others have hung up, you know, their dances shoes, as it were? I am just so blown away by Tom’s talent, his kindness, his intelligence, and it was just such an honor to work with him, so we are delighted to add one more laurel to his storied career with this, The Mary Pickford Award.” 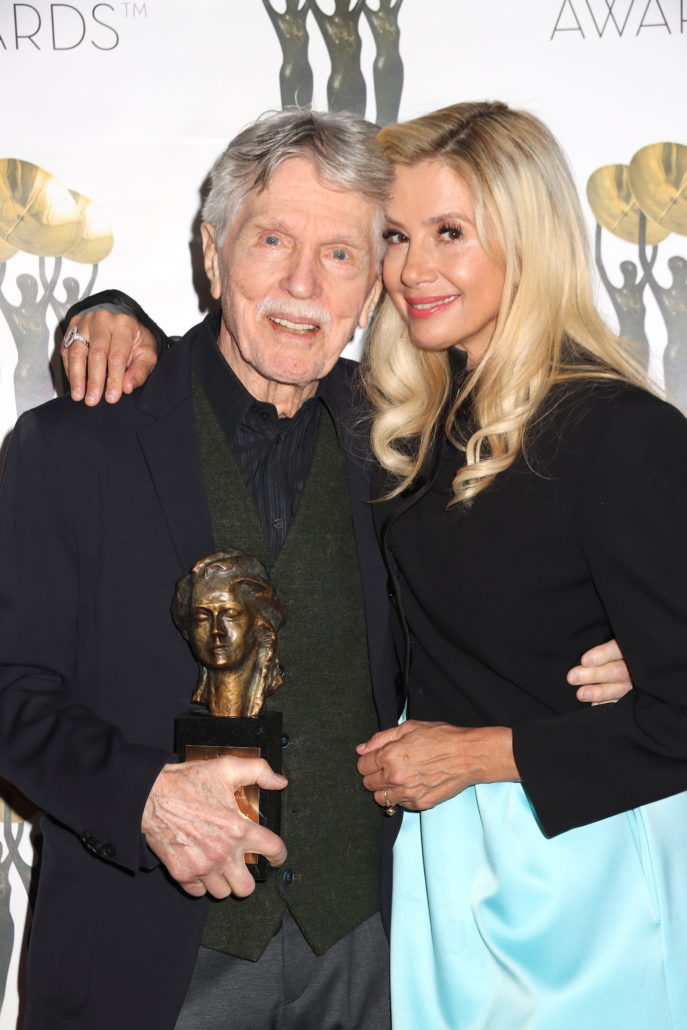 The loving introduction prompted Skerritt to share his own praise for his East co-star, and then he touched on his own beginnings in the craft they share. “I was in a movie with some other actors in a $1.98 movie. They invited me, I didn’t have an agent, I didn’t have Lou Pitt  [ICM, then legendary agent on his own]. At that time we would have negotiated better, even though it was a $1.98 movie. The other actors were Robert Redford and Sydney Pollack, and I never have been quite able to get over the great good fortune that I’ve had in this business. Making good friends with Robert Altman, and learning about all that good stuff (in filmmaking), before he became Robert Altman.”

Skerritt then saluted other iconic directors in his lifetime on screen. “Hal Ashby and Ridley Scott. How the hell you can fall into good things like that?” And if you wonder, like everyone else, if he returns in TOP GUN: MAVERICK where Val Kilmer has a cameo, you’ll have to wait until the May 18 release date.

For more show details, and how to attend the 27th Satellite Awards, please visit here.