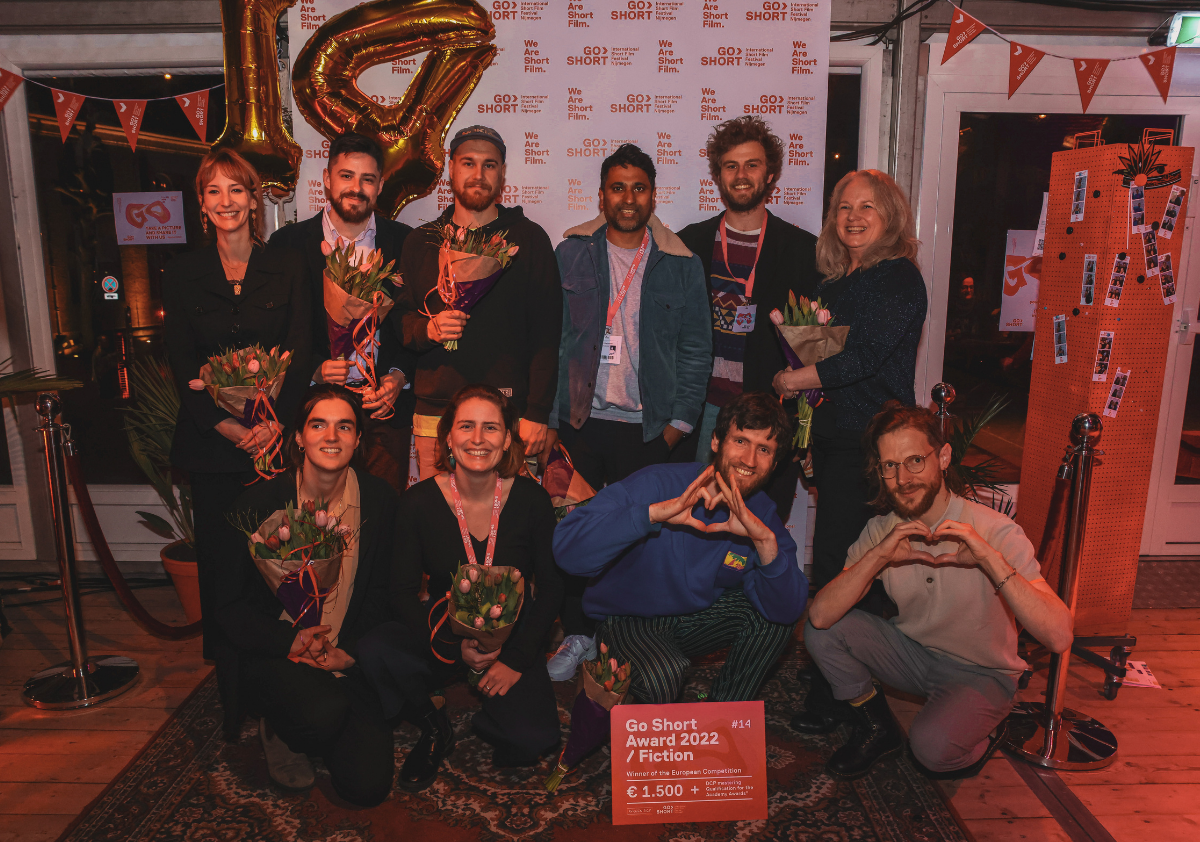 Last night, the Go Short Awards were handed out during the live award show of the fourteenth edition of Go Short – International Short Film Festival. With these awards, Go Short offers filmmakers an important platform to go to the Oscars, Bafta and European Film Awards. The jury handed out the awards personally in LUX, Nijmegen (Netherlands) to the lucky filmmakers.

Kent Chan won the Dutch Competition with his film Heat Waves and the French Audrey and Maxime Jean-Baptiste won the Best European Documentary with their film Listen to the beat of our images. On Sunday 10 April, the winning films, including the audience’s favorites, will be screened during the programs Jury Winners & Audience Favorites. Until 20 April, the films are available to watch at the Video-On-Demand platform Go Short Online.

Dutch Competition
Kent Chan’s Heat Waves is the best Dutch short, according to the Dutch jury. The jury is pleased to offer the VEVAM Go Short Award to a film that is crazy in the best sense. It takes you on a journey around the world, creating its own hyperreality through multiple audiovisual resources. A piece of art that excites yet alarms us of the challenges we face due to climate change. Chan wins a prize of €5,000 and by winning this award, this film is now added to the longlist of the Academy Awards.

European Competition
French Lola Cambourieu and Yann Berlier won with Bachelorette Party, an international premiere, the award for best Fiction. The film is an ambiguous and intimate portrait of a pivotal moment in young woman Maïa’s life. It’s about the inherent grief of making difficult choices and a character deeply in love with many possible futures. The jury was deeply moved by the film’s sense of sorority, its tactile visuals, and the filmmakers’ empathy in capturing their characters inner lives. In depicting a balance between desire and duty, a perfect sense of balance is maintained by the film.

Listen to the beat of our images by Audrey and Maxime Jean-Baptiste won the award for Best Documentary. The selection for the documentary award by the judges is a reminder of the way that history is written by the victors. They loved how the film’s form, texture, and aesthetics are  interwoven with the way that myth-making is used as a form of control. The film reclaims some autonomy by narrativizing the cost of displacement, and the lingering repercussions of the stories that are told as justification. The judges deem this film as a collective reach for a place that no longer exists.

The award for Best Animation went to Granny’s Sexual Life of the Slovenian Urška Djukić and French Emilie Pigeard. The film picked by the jury for the animation category is a striking reminder of the objectification of the female body through reproduction and male pleasure. According to the judges, this is a film about how we take past suffering for granted for our present freedoms without considering the pain that was endured to secure them. The animation bristles with a dynamic energy that seems to channel the violence into drawings on screen. In its accessible and relatable presentation, it’s a highly effective illustration of generational trauma. A Film About A Pudding from Dutch animator Roel van Beek received the Special Mention in this competition.

All winners of the European competition are added to the longlist of the Academy Awards and they receive €1,500. Also, they can get their DCP Mastering service of Go Short’s partner Green DCP.

Student Competition
The Encouragement Award for Best Student Film – with prize money of €1,500 – went to Soum from the French Alice Brygo, a film that balances between reality and fiction. The jury determined that this film addresses the need for new social structures, depicting its characters’ exploration of their inherited, self-perceived and performed identities. The jury was particularly fascinated by the filmmaker’s ability to unite the multiple personal perspectives in a cheerful manner.

European Film Awards
Handbook by Pavel Mozhar received the Go Short nomination for the European Film Awards. The Jury: “Our chosen EFA candidate film marries chilling, mechanical aesthetics to a visceral rendering of a film system designed to humiliate, suppress, and subjugate. The message of this film is clear: to punish free expression, is to adopt a punishingly effective language of violence. This film makes us feel on a cellular level – in ways arguably only cinema can – the cries muffled by systemic oppression and external deafening. It is so very important to embolden and support those voices capable of dismantling systems of tyranny from within.”

Eye Tunes: Music Video Competition
Auf Wiedersehen by the French Nicolas Medy won the award for Best Music Video. The Jury called the submission by the musical artist group Mansfield.TYA an “ambitious, precise and visually impressive film with a stunning use of light and cinematography”. They were convinced of the way queerness, body movement and the power of rituals were celebrated. The Special Mention went to German filmmaker Peter Haueis with his film Grotchz.

Audience Award
The audience had their say as well! Through QR-codes that were shown after each screening, people could vote on their favorite films in the audience and through the Video-on-Demand platform. The winner of this award was the Dutch Ayla Çekin Satijn with her film Beş.